We're here to help with answers to some of our most frequently asked questions.

Find common questions related to the core CloseSimple product features and our integrations.

What title production software (TPS) does CloseSimple integrate with?

CloseSimple has seamless integrations with:

We have plans to integrate with other TPS in the future, so if your title production software is not one of these four, please drop us a Contact Message specifying which TPS you are on so we can notify you once we offer that integration.

Do I need to be on one of those four title production software (TPS) to get CloseSimple?

At this time, CloseSimple does require an integration with a TPS to pull the data required to send the customized email and text messages. If your title production software is not one of these four, please drop us a Contact Message specifying which TPS you are on so we can notify you once we offer that integration.

What is the difference between the automated and manual versions of CloseSimple?

Your team is already busy simply trying to get through all of their current workload, so the last thing you may want to do is add another “to-do” to their plate.  CloseSimple makes this easy with both our manual and automated versions, which means no double data entry, saving up to 60 minutes per file in busywork.

Our manual version requires two to three clicks of the mouse to send the custom email and/or text messages directly from the Title Production Software… so it’s still fast! But not as fast as the automated option.

Our automated version gets triggered by preselected actions in your title production software (available for SoftPro Select, RamQuest and ResWare), so when your staff completes an action in the TPS, CloseSimple will be automatically notified and the email/text will be sent (with no additional work or thought from your staff).

Our team will help you decide which version is best for your title company.

What if my title company has multiple brands, locations, or offices?

CloseSimple makes scaling your software easy across multiple brands, offices, locations, and even closing teams. Each brand, office, location, and closing team can feature fully customized email and text messages that can either be automatically or manually sent from your CloseSimple integration.

If your title company simply has multiple locations or offices (but the same overarching brand), we will set this up for you, including it in your standard CloseSimple setup process.

If your title company has multiple brands (all on the same TPS), the CloseSimple onboarding team can set up each individual brand with its own profile on your TPS, using its unique branding and verbiage (an additional setup fee will apply).  Contact us for pricing info.

How easy is it to launch additional branches or brands after I launch?

We make it easy to launch additional locations, offices, and even brands after you launch. Doing so may affect how we set up your custom program, so when you are getting your program first set up, it will be important to let your onboarding specialist know that you plan to do this in the future.

This sounds amazing, but what if I’m not tech-savvy?

You probably got into your business so you could focus on closing files, not dealing with complicated software - so we make it easy on you.

Our name is CloseSimple, so as we like to say, “if it’s not simple, we named it wrong.”

The CloseSimple onboarding and client success staff are always here to help answer your questions and make sure you are getting the most out of your CloseSimple program.

How much does CloseSimple cost (do you charge per file)?

CloseSimple has one flat monthly fee based on the average number of files closed per month (so take the previous year and divide by 12 to get this number, or let us know what you project for the upcoming year).  Once you know that number, we put you into a price tier.

We offer this type of pricing because we know how title companies do not like variable pricing - they just want to know how much CloseSimple will cost.  We also do not want to decentivize use as you grow and hire more people (only to realize your software costs go up).  For pricing info, check out our Pricing Page.

Is there a setup fee?

There is no setup fee for CloseSimple for our standard onboarding process.  This includes our team creating all of your digital assets (custom to your title company), integrating CloseSimple with your TPS, and training/supporting your staff.  For pricing info, check out our Pricing Page.

Do you charge for support after launch?

Absolutely not. Our client onboarding and success teams are led by a veteran of the title industry, who had 13 years of experience before joining our team.  Under her guidance, we have developed a system to not only launch your CloseSimple program, but to make sure it’s being used and supported by our staff.

Once launched,  your onboarding specialist makes sure you and your team are using CloseSimple and you will be assigned to a dedicated CloseSimple client success manager whose entire goal is to not only make sure you receive support to continue using it, but also to see that CloseSimple continues to help you reach your goals.  Together, our support staff and your success manager will be available to help with anything as you need it.

Common questions about CloseSimple email and the features of the "Pizza Tracker."

What are the most-used timelines and timeline steps?

We get this question a LOT, so we decided to put together a quick PDF that highlights our most used timelines and steps. You can download it here:

Are the timeline steps customizable?

Yes. Timelines and steps will be customized to your process. Our team will help guide you in the right direction during implementation, and you’ll have full control over all of your content throughout the whole process and after launch.

Do you encrypt outgoing emails?

Yes. And we can do you one better: we’ll integrate CloseSimple with your email service. Whether you’re on Microsoft Office 365, Exchange, or even Gmail, we’ll make it easy to send your emails through your server to pick up your existing encryption policies.

What happens if someone replies to an email?

Our onboarding team will configure your CloseSimple email settings so the reply-to goes to the member of your team that is best suited to receive the reply. This could include an escrow officer, processor, etc.

Does a copy of the email go into the file in our TPS?

Yes. On ResWare and RamQuest, it will go directly into the TPS. This feature is coming soon on SoftPro as well.

Yes, CloseSimple can be customized to send a different email to each recipient. It can also be set up to send one email to the buy-side recipients and one to the sell-side recipients. Emails typically come “from” the member of your team who’s assigned to the file - normally an escrow officer or processor.

How text messaging with CloseSimple works.

What is the difference between one-way and two-way texting?

One-way text messaging is like what you would receive from your dentist. It’s a simple push notification that will include a contact name (typically an escrow officer or processor), their email address, and a phone number to reach if there are any questions. Text messages are generated from your title production system.

Two-way text messaging opens up the opportunity for an escrow team to text back and forth with realtors, lenders, and consumers after update texts are sent out of your title production system.

What happens if someone replies to a text message?

If the title company is using our one-way texting, the individual that sent the text will receive an auto-reply, letting them know that they texted a no-reply # and that they can call or email their contact at the title company directly with any questions.

If the title company is using our two-way texting, the individual at the title company that the text “came from” will receive a notification in their CloseSimple text messaging browser, and can reply similar to a Facebook message or iMessage.

Since CloseSimple integrates directly with your title production software, it is able to pull in the information on each recipient (their name, role in the transaction, phone number, etc.) so the text messages can be customized to the appropriate recipient.

Also, since CloseSimple is tied to your unique user profiles on the TPS, it will send the text or email from that person’s unique number or email that was previously set up in CloseSimple.

With a name like "CloseSimple," the setup and onboarding should be simple or we named it wrong.

Does your team handle setup, or do we? 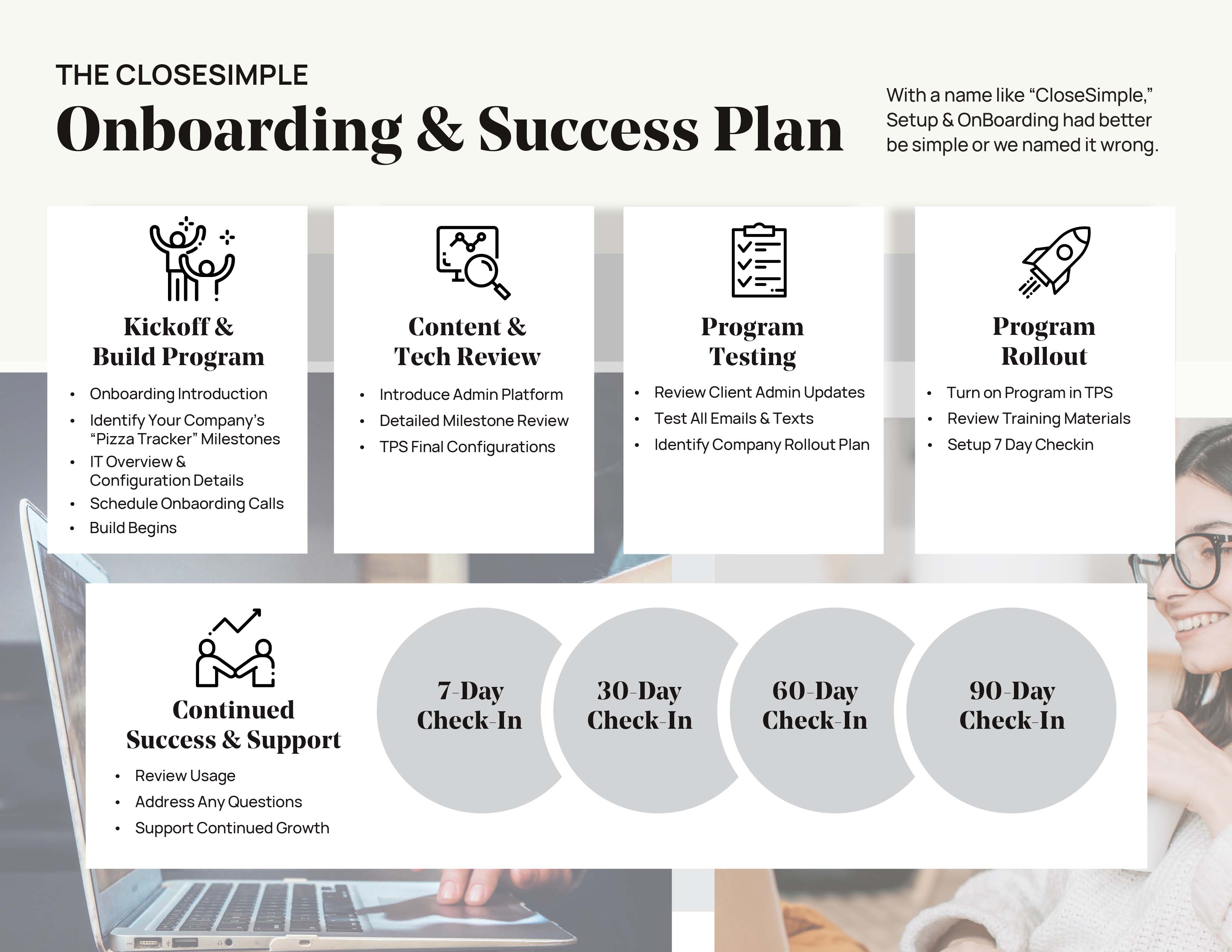 The CloseSimple implementation team will handle as much of the onboarding process as you’d like. From content to technical implementation (including automation) to training, we have launched programs of all sizes all across the country, and are happy to take on as much of the work as you need.

At minimum, you’ll need to review your final content, but we’re here to make this easy on you.

How long does it take to get up and running on CloseSimple?

How do I increase adoption of CloseSimple across my team once it's launched?

Good question! CloseSimple features a team portal where your onboarding specialist will post instructional videos that can be shared with your team; but their main goal is to make sure you and your team are equipped to use CloseSimple, then make sure that it is actually being used.

Following a 90-day post-launch success plan, you will be assigned a CloseSimple success manager whose sole responsibility is to make sure you are getting the most out of your CloseSimple integration and that it is helping you reach your goals.

Is there a fee for live training?

No. Live training is included in the standard CloseSimple setup process.

What kind of support do you offer once we are “live”?

First, your own dedicated CloseSimple client success manager: you will be introduced to your client success manager after the initial 90-day onboarding period. They will meet proactively with you every 90 days to ensure you are getting the most out of your program and to evaluate adoption, usage, and results.

Second, client support: while you will have access to manage your account, CloseSimple support is available at any time to handle any change requests or technical issues that arise. Our response time is typically same-day, but never more than 24 hours

How we send secure emails and what our encryption protocols are.

Do you encrypt outgoing emails?

Typically, our clients choose to send emails through their own email service. Our system is set up to integrate easily with Microsoft Office 365, Exchange, and Gmail.

If we do this standard integration, then outgoing emails can typically pick up any encryption policies our clients are already using.

Do you encrypt your data at rest?

Yes. All data is encrypted at rest.

Do you encrypt your data during transport?

Yes. All data is encrypted during transport.

What type of information do you collect and for how long?

We receive standard payloads from each of our TPS integrations that primarily include  contact information for parties involved in the transaction along with other file-specific data. We do not receive or store social security numbers.

We store information briefly to execute our services, but do not store it long-term.