We help RamQuest users stand out during Closing.

See How the Integration Works Integration with RamQuest means zero double data entry, and a seamless transition from RamQuest to CloseSimple.

On-boarding typically takes less than one month, and we help you design all of your content, including branded assets & timelines.

Sending text message updates to your Realtor and consumer customers takes the closing experience to the next level and differentiates you in a sea of sameness.

You control what your text messages say, and if you choose a manual delivery process you can even edit them prior to sending.

You can take advantage of our integration with Zipwhip to text enable your office number, meaning when your customers see you coming through their phone, they know you're moving the file forward.

The Pizza Tracker for Title™.

The pizza tracker delivers peace of mind to your customers, cutting down on phone calls & inquiries to you and/or your staff. Each milestone is customized to your process and we'll work with you to ensure you have the rights steps in your custom tracker.

Watch your team spend less time doing the busywork of emails and project management, and more time on what makes your business money. 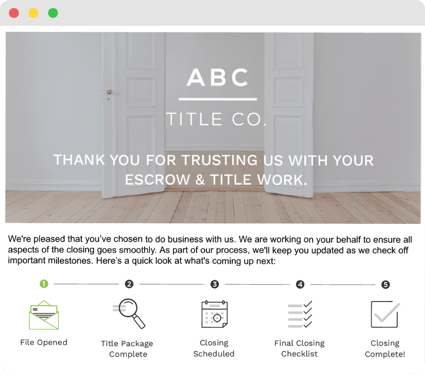 Contact us to chat about bringing CloseSimple to your RamQuest.

Question: Does CloseSimple work with OP2?
Answer: Yes! It also works if your servers are on premises/with a different hosting company.

Question: How long is the setup time?
Answer: A typical integration takes around 30-45 days - that said we'll go as fast as you can.

Question: How much work is it to implement?
Answer: We try to take as much of the implementation work off your hands as possible. Here's what an integration normally looks like:

Question: OK, I get that, but how much work is it to set up on the RamQuest side?
Answer: RamQuest has made it REALLY EASY for us to set it up. You'll need to create new tasks that include CM Automation triggers, and insert those into your current workflows (this may mean you're replacing some steps, or simply adding some)

Question: What data can CloseSimple get from RamQuest?
Answer: Most order data including property information and contact information. RamQuest One does give us a bit more flexibility with the data, but both platforms are good.

Question: Where/who do emails come from?
Answer: Most customers choose to send emails directly through their own email servers. Typically they set up an email address like notifications@abctitleco.com to send them from. In terms of "who" they come from, they'll look like they're coming from the Escrow Officer/Closing Agent, and if someone replies to the email, you can specify where you want responses to go on each email.

Question: Do copies of emails go into a closer’s outbox?
Answer: We can push a copy of any CloseSimple notification directly back into FileScan (choose one, or choose them all!). Meaning you’ll have a timestamp on when a notification was sent, and you can easily reply-all/forward the emails when needed.

Question: I heard you have an outlook calendar integration. How does that work?
Answer: If you’re on a hosted solution (Not OP2) and use Outlook to schedule signings/closings, we can integrate with your calendar to pre-fill meeting invites with data out of RamQuest - meaning we auto-create the invite with attendee info, subject line, date, time, location, and body content. Taking it a step further, if you use shared calendars for scheduling, we can tell the invite which calendar to put the invite on.

Question: Are emails encrypted?
Answer: The vast majority of our customers are choosing to send CloseSimple emails out of their own email servers, meaning we can almost always pick up your existing encryption protocols. If you choose the CloseSimple server, we utilize forced TLS encryption on all emails.

Question: Are you going to continue making CloseSimple better?
Answer: Yes! We have a lot of new features in the works and we love to hear ideas for what else it should do. Please reach out with any recommendations.

Question: How much does CloseSimple cost, and how does payment work?
Answer: CloseSimple features flat-monthly pricing, which is dependent on the average number of files you close each month.  Pricing typically ranges from $1.50-$4.00/file and once we know what your custom setup will look like, we can quote your implementation.  There is also a one-time setup fee for us to configure CloseSimple on RamQuest and create all branded content for your company.