“I've landed two new clients just in the last week because of CloseSimple.”

Amy Schulze doesn’t rave about Title solutions lightly. As the systems director for Columbus-based Northwest Title Family of Companies, her standards are high. But when she finds a time-saving solution that also attracts new clients, she’s genuinely enthusiastic, which is why she sat down to talk about CloseSimple.

What is CloseSimple?  (And why does Amy love it?)

CloseSimple is an integration that sends proactive status updates on behalf of Northwest Title’s team.

A title commitment is complete? CloseSimple automatically sends an email (and text) to the real estate agents and anyone else involved.

“This is the age that we're in,” says Amy. “People want to know, ‘What's the status?’ They can track it on Amazon, they can track it through Domino's—so this is the thing the Title industry really, really needs.”

“I've landed two new clients just in the last week because of CloseSimple.”

When real estate agents encounter this level of communication for the first time, after being used to having to constantly check in for closing updates, they usually discover they can’t live without it.

This was the case with at least one recent closing for Amy’s team. After experiencing how well-informed Northwest Title kept their clients, both the listing agent and the buyer’s agent became repeat customers. “They both came back later and said, ‘We just found our new Title company,’” says Amy. 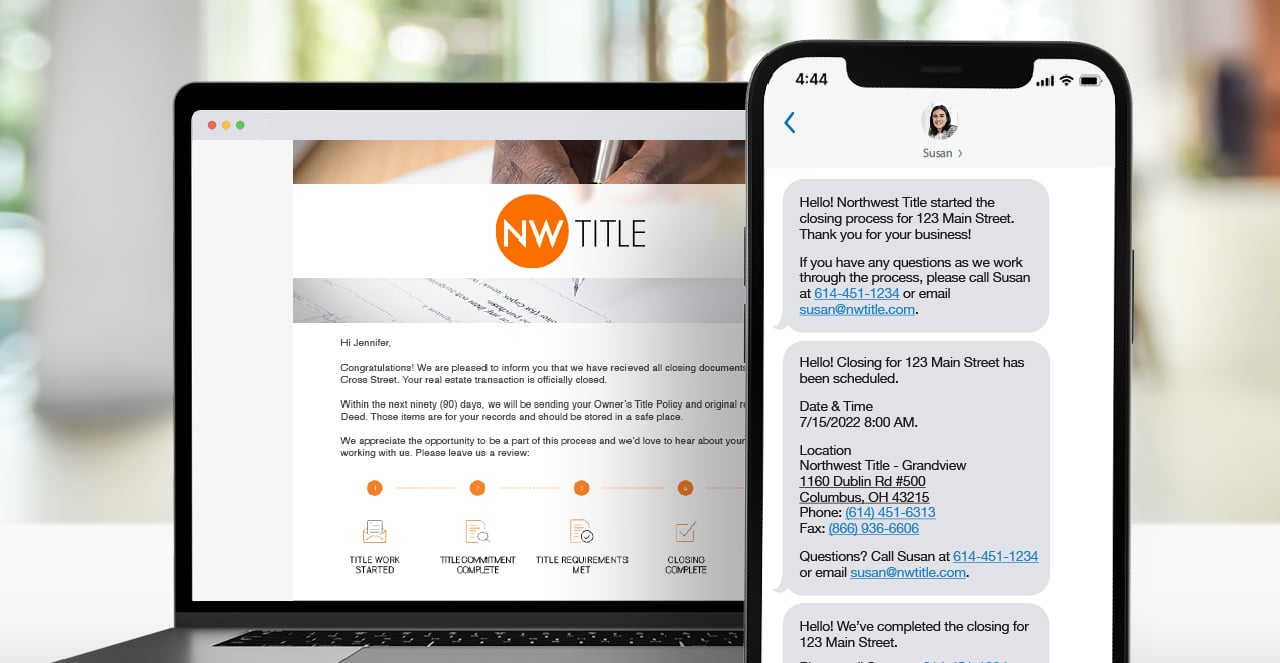 The CloseSimple integration automatically sends proactive messages when a milestone has been reached. The texts and emails are fully customized to Northwest Title's brand, so customers know exactly who it’s from.

Just because CloseSimple could eliminate busywork and impress customers didn’t mean it was a shoo-in for Amy. If it hadn’t integrated seamlessly with RamQuest, “That would have been a non-starter for us,” she says.

Even more importantly, if CloseSimple’s email templates weren’t customizable, Amy never would have agreed to try it. So when Amy learned they could white-label the emails—with no hassle—it clinched the deal. Since then, Northwest Title has branded their solution as “Northwest Notify”, and they’ve created custom email templates for each of their five brands, as well as a specific message cadence for every type of closing scenario.

Amy calls CloseSimple’s level of customization “spectacular”. “The fact that everything goes out with the Northwest name is huge to us.”

“It's genius. And nobody else is doing that. It is so awesome.”
Amy Schulze

The initial customizations were great, but Amy figured making tweaks might get complicated. What if our company wants to adjust the wording on an automated message? Would she have to call the CloseSimple team and wait a week or two?

She was delighted with the answer.

“I can literally, in real time, log in to CloseSimple, make that adjustment, and—boom—it's just done,” says Amy. “It's amazing. And that is unheard of. I don't have any other type of partners that we currently work with through RamQuest that gives me that kind of administrative control.”

“It's taking the communication points that you would already be giving to the client and elevating it to the Nth degree,” she says, “because now you're able to attach documents, you're able to add specific things to their transaction if you need to, but you're not spending the time drafting the email in the first place.”

So what would Amy do without CloseSimple? “Oh,” she says. “I would be miserable. We'd have to go back to the old-fashioned way. Which I can't do now.”

Fortunately, she doesn’t have to.

Ready to wow your real estate agents with great communications? Discover the power of CloseSimple.